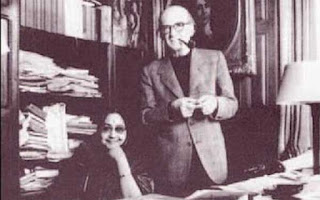 Hope you are doing good...

I am contacting you on behalf of the Indian Embassy in Romania. We are doing an Independence Day publication for the Embassy i.e. 15th August. We would like to do a story on Indology and the how the literature of Romania is greatly inspired from India in a form of Rabindranath Tagore and the connection of Tagore and Mircea Eliade.

The article needs to be of 1000-1500 words. Since you are an expert on the subject, we request you to kindly contribute an article on the subject. I would really appreciate if you could please send the article by this Saturday. We need to submit the first draft on Saturday this week.

Your revert will be highly appreciated.

Rabindranath Tagore visited Romania in 1926 and received  a doctorate honoris causa from the University of Bucharest. Mircea Eliade spent four years (1938 – 1931) studying philosophy and Sanskrit at Calcutta University. Maitreyi Devi wrote Rabindranath – the man behind his poetry, as well as Na Hanyate ( It Does Not Die: A Romance) novel, written as a response to Maitreyi /Bengal Nights  by Mircea Eliade.
Among classic Romanian works inspired by India are medieval books like Alexandria, Sindipa, Varlaam and Ioasaf – to  Ţiganiada/Gypsy Epic by Ion Budai-Deleanu, or Mihai Eminescu's   Rugăciunea unui Dac /Prayer of a Dacian. Now a day, from the oak tree planted at centenary of Gurudev in Bucharest to  Shantiniketan one faces both mistery and  greatness of India.          For an intended Indian-Romanian conference on Indology, Dr. Shashi Bala thinks   it should incorporate history, linguistics, literature and ritual.  There may be a panel discussion on Indology in Romania - past, present and future. Other topics can be Sanskrit for all round cultural development, Role of Upanishadic philosophy in establishing peace and harmony ; vedic ritual for controlling pollution...  Professor Sayavrat Shastri  suggested Modern Sanskrit Literature, Sanskrit teaching both in India and abroad, the utility of Indological studies for modern society.

TAGORE
“The Great Empires, wrote Tagore (" The Second Birth "), change their shape and shakes like clouds; nations play their part and then disappear into obscurity, but these individuals bear in them the immortal life of all humanity”. He was talking about revealing personalities, breathing in the world of the Spirit. We speak of him in Calcutta's birth (May 6, 1861).
In the Victoria Memorial, today's Bengal Museum, Tagore plays in a Sanskrit drama, with the Nobel Prize on the wall, in front of  young actor photo. In the palace of his memory in Shantiniketan, I searched in vain through the vast iconography of his follow-up in Bucharest (November 1926). All of us would build palaces from Tagore's footsteps. I was telling then that the Saint of Montparnasse Brancusi and the Saint of Shantiniketan Tagore, both of whom were scratched  in the words of Tudor Arghezi, cut spiritual salvation into the world. That Tagore is an old Christ, a big brother with the Christ Wallachian Mihai Eminescu. Calcuttan, by birth, Amita Bhose could even avoid the taste of death by incinerating in Bucharest near the tomb of Eminescu, spreading herself  into the cosmos of Orpheus and Tagore alike.
The doctrines of the third millennium will not be able to avoid what Philosopher N. Bagdasar had imposed in 1938, the contrast between European civilization, now on the same American, materialist trend, and the Indian-Oriental culture of the soul and the interior. If the incorporation of Tagore's thinking into Romanian culture in the 1920s and 1930s could have been destroyed even by Tagore himself, when Sovietized, the third, the fourth Tagore will be again and again the Tagore the first, the true one.
A blasting Tagore aura shows how he named Gandhi “mahatma”.  Think how Vivekananda died at the age of 39, as Eminescu.. What title got Ramakrishna?... Chased by the white ants, ui poka, even you, Tagore.
An existential-religious competition at the temple. Power cut in Lebedev + Gorki Sadna. Eisenstein, Russia moved here with a puppy with a piglet, whatever comes in no longer coming out. Birla Planetarium, Rabindra Sadan, Matro St. Paul's, Cathedral, Handicraft Bazaar, Sunil Ganguli, Satyajit Ray, Father Panchal, Mrinal Sen, Ashok Kumar, Dilip Kumar, Kishor Kumar, Amitabh Bachchan, Guru Dutt.
I'm breaking apart from Calcutta before I know how things go to the department of ancient history, by goodbye.
Let  be not dispersed Tagore's house in Pandua, Orissa, former Bengal, where he was writing under a bakul tree the Chitrangada drama-dance.  Here was the revenue inspector office. The 1971 cyclone has shattered the surrounding houses, but not that of Kabiguru.  Now, ready, we can rebuild our houses, we can not replace Rabindranath's. Sarada Prasad Malik, no point in building an auditorium in a remote village. The Rabindra Mandap was finally built in Bhubaneswar.
The villagers installed a statue at the entrance to the village and the main street called Rabindra Sarani, unrecognized by the government. Money for bakul mandap. The youth formed the club Biswakabi Rabindranath Yubak Sangsad. They tried a Rabindra Library. Tagore called them: baba aum khao. He came here by dolparba before moving to Shantiniketan. Cooracharan Sahoo, the 56-year-old son of the late Durjodhan Sahoo, Tagore's estate manager: my father handed me all the papers before he died and asked me not to lose them. I kept my word and saved the papers though I lost my belongings.
Likewise, ready to drown in the ocean, Camoens was wearing the Os Lusiades manuscript above his head.
In 1926, on November 21, Tagore was not here. It was in the National Theater in Bucharest and uttered his  conference on poetry and Indian thought. Today, November 22, 1999, in Shantiniketan, the next day we remember the endlessness of the Ganges-Danube whisper. Headline, that Dr. George Anca has delivered two lectures, Tagore in Romanian Perspective, Vidya Bhavan, 22 November '99, Tagore and Eminescu, 23 November.
“Who are you, reader, reading my poems a hundred years hence?” (Tagore)

11 Jan. 1979 / Dear Mr. Anca, / Thanks for the letter and for 10 Indian Poems. I'm glad you got to Le Cahier Mircea Eliade. I understand, however, that you have not received the other books sent here, many months ago (I think in May-June 1978!). I'm still trying: expediat tomorrow by air mail Myths, Rites, Symbol: a Mircea Eliade Reader (2 vol.).